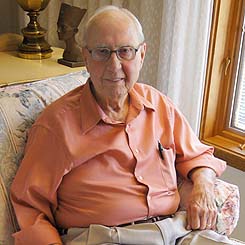 Robert knew that this was important as June had asked that he set up a scholarship program in her honor after she passed.  “June wanted someone from Howard County going into nursing to receive the scholarship,” explained Robert.

Both born and raised in Greentown, Ind., the two met at and attended Union Township High School (which would later be consolidated to form Eastern School Corp).

Eager to become a couple, the pair got married on Oct. 3, 1938, before graduating high school. Soon after Robert and June moved to a house near Oakford, Ind., and then bought a home on Main Street in Greentown, Ind. They enjoyed remodeling, painting and creating their home together. June and Robert graduated from Union Township after taking night classes in 1947 and 1946, respectively.

The Hill’s had five children.  They moved the family to the country after purchasing June’s family farm which sat on 90 acres of land. The kids were involved in 4-H cattle and swine raising.

Not only were the kids involved in the community, but Robert and June were also. Robert was a member of both the Greentown Dentist and Physician acquisition committees, allowing Greentown residents access to local health and dental care. Robert also served on the Purdue University Industrial Advisory Committee, was an active member of the Greentown Lions Club and helped out at the Sangralea Home for Boys in Onward, Ind.

June served in the community on the Eastern Howard Performing Arts Society board, was a member of the Greentown Historical Society and was active in the DM Philanthropic Educational Organization (P.E.O.) Sisterhood of Kokomo. Both Robert and June enjoyed golfing. The two were married for 69 years before June passed in 2007.

Robert’s career took him from working as a farm hand to stringing wires and setting up poles for a telephone company. The majority of his career was spent at Delco Electronics in Kokomo where he started as a journeyman electrician. He retired as the General Superintendent of Delco Electronics Kokomo Maintenance in 1982 after 43 years of employment.

June was a loving devoted mother and housewife. But once three of the Hill’s five children were grown, she decided to change her career path.

“June thought everyone on earth should do something for mankind,” said Robert.  “She believed people should leave the world better than they found it.”

Keeping her philosophy mind, June considered going to college to become a teacher, but eventually decided to pursue nursing and serve mankind in that manner.

She studied nursing at Indiana University Kokomo (IUK) and maintained good grades all while taking care of her family. June graduated in the first nursing class at IUK as a Registered Nurse (R.N.) in 1969.

After earning her diploma, June put her newfound R.N. skills to the test when she went to work at St. Joseph Hospital and later at Tipton Memorial Hospital. Robert recalled that June was a very caring nurse who believed “that you ought to give total care to a patient.” June went above and beyond to do more than just cure her patient’s illnesses, “she gave total care to her patients.”

June’s legacy of total patient care will live on through the June Brown Hill PEO Nursing Scholarship. The fund will enable future nurses to obtain their degree and go on to offer total care to patients.