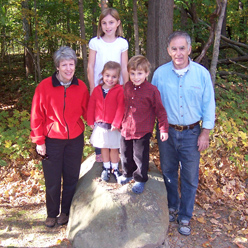 When Bob and Betsy Hoshaw came to Howard County thirty-five years ago, it was primarily to relocate for a job. Bob was on the road a lot and Betsy stayed at home to raise their children. She has also taught students in the eighth grade for a number of years. Although neither Bob nor Betsy were originally from Howard County, they both felt that it was important to be a part of the community and contribute. As such, before Betsy started teaching, they founded a group called "Open Horizons". This project allowed troubled teenagers to travel to the Boundary Waters as a group and experience the outdoors. The teens not only gained important social skills, but learned to appreciate the connection that they had with God and nature.

Building on their passion for the outdoors and their strong beliefs in philanthropy, they started the Betsy and Robert Hoshaw Environmental Endowment Fund with the Community Foundation of Howard County. Their dream for Howard County is to "have a well-balanced, healthy place to live." Ideally, Bob and Betsy would like to see projects started to preserve the environment and establish places where people can spend time outdoors and stay healthy. Bob has been actively involved with the Wildcat Guardians organization, and would like to provide for the continuous improvement of the water quality and surrounding environment of the Wildcat Creek Watershed. The first of the grants from the Betsy and Robert Hoshaw Environmental Endowment Fund will be awarded in 2009.

The Hoshaws decided to work with The Community Foundation to help the community because they were actively involved in its creation and remain involved in its success today. They have seen the improvements made to the community as a whole, thanks to the generous donors, and decided that the Community Foundation would be the best place to establish their fund. In addition to their work with the Foundation, Bob and Betsy work with a variety of community organizations. Betsy attributes her passion for philanthropy to her Christian background. They are both actively involved with their church, the First Congregational Church in Kokomo. Other community organizations that they have been involved with include the Mental Health Association, the United Way, Leadership Kokomo, Project Access, and the Vision Program of Partners in Education. The Community Foundation of Howard County is very grateful for the work that Bob and Betsy have done in the community and look forward to seeing their Environmental Endowment Fund help both present and future generations.